Saying sorry isn't enough, you have to DO sorry.

Saying sorry isn't enough to undo the effects of the '94 Crime Bill. It’s time to DO sorry. 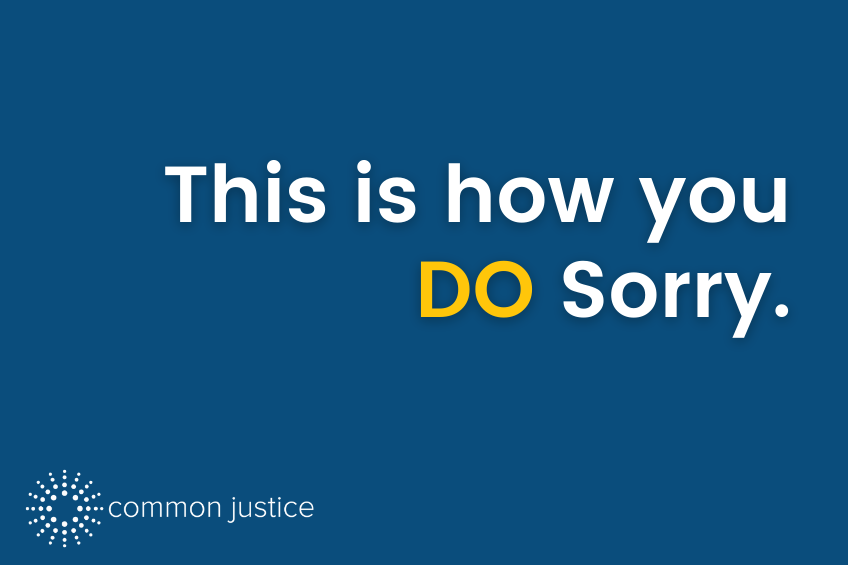 Both Donald Trump and Joe Biden have spoken about the 1994 Crime Bill as a mistake, all the while defending certain elements of it and never charting a way forward that fully reckons with the harm it caused.

It's not the first time an elected official has expressed some regret for the bill. However, to date, our federal government has yet to fully reckon with the bill’s long-lasting impact and offer an apology to Black and Brown communities for the harm the bill has caused. That has to change.

Saying that his support was a mistake is not enough. At Common Justice, we talk about accountability as not just as saying sorry but DOING sorry. These are the five steps to accountability and what it would look like to take them:

The 94 Crime Bill’s major components included: the 3 strikes rule, which imposes a harsh life sentence without parole on individuals charged with certain crimes; truth in sentencing laws and initiatives, which limits an incarcerated person’s chances for early release; and subsidies of more than $12.5 billion to expand state prisons.

The crime bill has devastated Black and Brown communities. Together, this bill package made some of the single greatest contributions to the rise in mass incarceration, dramatically lengthening sentences, and diverting critical resources to imprisonment. The bill disproportionately impacted Black and Brown communities, separating families, gutting the social safety net, substituting policing and punishment for meaningful support, and subjecting people to inhumane amounts of punishment. Its lasting impact has devastated communities for generations to come.

An acknowledgment that something was a mistake is not the same as an apology. As Mia Mingus describes it: “Apologizing is a chance to acknowledge and take responsibility for the hurt or harm you caused or were complicit in. It is a moment to demonstrate to those you have harmed that you understand what you did and what the impact was.” It is not saying “oops”; it is saying “I was wrong, and I am responsible for that.”

Make things as right as possible, ideally in ways defined by those harmed

Making things right will not only require repealing the 94 Crime Bill. It will not only require making new provisions retroactive. (None of which Biden or Trump have expressed interest in doing.) It will also require the President to make comparable (which is to say, vast and lasting) investments in the people and practices separate and apart from law enforcement and prisons that actually do produce safety—investing in local grassroots groups that address harm and violence, building the infrastructure that will support intergenerational wellbeing, and ensuring everyone’s basic needs are met. And it will require taking direction and yielding power to those most impacted by these laws and by the new investments and structures we can build in their stead. The People’s Coalition for Safety and Freedom is one of a number of groups of organizers, activists, and directly impacted people working to dismantle the ’94 Crime Bill & create a new vision for public safety and justice transformation, and their policy platform could offer a meaningful blueprint for this repair.

Become someone who will never do it again

Ensuring these changes are durable will require not only reversing the law but reckoning with the lasting impact. This means, in part, lasting accountability to and investment in Black communities and other of color most harmed by the 94 crime bill and its intergenerational effects; it will mean shifting our narrative about crime in the US to one that upholds dignity and safety rather than punishment and revenge, and it will mean shifting power and resources to Black and Brown communities to define what safety looks like and how it will be achieved.

We at Common Justice believe that anyone who has caused harm can and should take the necessary steps towards accountability. Taking accountability doesn’t just start and end with an apology or admission of guilt, it means DOING sorry and taking actionable steps to repair what has been broken. The President in 2021 will have a chance – and an obligation – to do just that.