Defunding police is not enough to end racial violence. 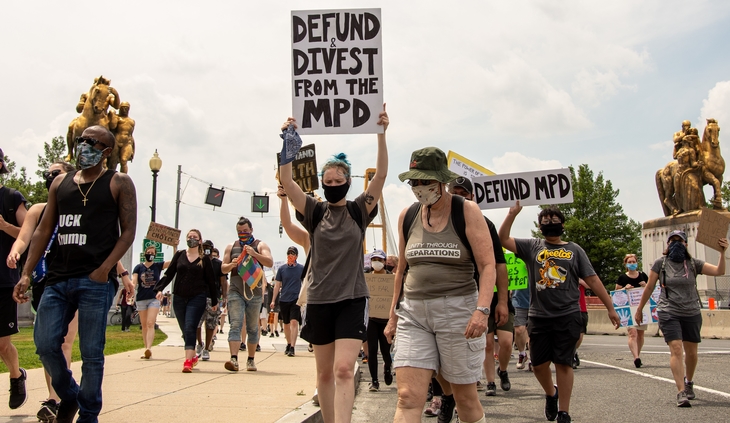 We are witnessing an unprecedented change to our country's criminal justice system that is simultaneously overdue and insufficient. At least 12 cities like Baltimore, Los Angeles, and Portland have all committed to invest in their communities by divesting from their police departments by several million dollars 1. The Minneapolis city council announced they would formally disband their police department due to a "complete loss of trust" 2 after the way the department handled the murder of George Floyd. (The move to disband the police department has recently been halted 3 by a commission of Minneapolis residents, which blocks the council from putting the decision to disband the department on the November 3rd ballot; delaying the issue for at least another year.) Floyd's death sparked international protests calling for justice and equality for Black lives. Though disbanding the police department in Minneapolis and defunding police departments in cities across the country is a huge win for safer, more equitable responses to violence, and for the movement to abolish prisons and policing, I can't help but wonder where those officers will turn to for employment and how cities and states will respond to the space defunding opens up.

We know that people who have worked in law enforcement are unlikely to seek jobs in other sectors like retail or social services. They will most likely look for jobs that they have been trained to do -jobs that put them in a position of power and enforcement. And similarly, municipal, state, and federal governments will continue to invest in enforcement even if local policing investments decline. This is why defunding the police is not enough.

Just last month, the GOP put forth a $1 trillion dollar COVID-19 stimulus package 4 which included nearly $30 billion dollars towards military spending. That bill didn't pass the House, yet it is a harsh reminder that this country's top expenditure and top priority is and always has been war. And as proven in Portland, where Trump sent tactical border patrol agents to arrest and deter protestors, sometimes the war that U.S. wages is against its own people.

Defunding the police alone also won't stop the murder of innocent people at the hands of law enforcement. Despite the international protests that happened in the wake of George Floyd's death, 558 5 civilians have been shot by police in 2020 so far, and the officers that killed Breonna Taylor have yet to be arrested for her murder. Sustained protests for justice in the names of George Floyd, Breonna Taylor, Ahmaud Arbery, Elijah Mcclain, and countless others, have been reignited by the recent shooting of Jacob Blake, who survived being shot in the back 7 times by police.

Defunding the police also cannot undo the violent mentality that tells officers to shoot unarmed civilians and it won't change the fact that Black people are 3 times more likely 6 than white people to be killed by police. In order to truly stop the violence and the harm done to our communities by law enforcement, we need to have a deep and honest reckoning with our role as a nation in the violence that occurs everywhere from our inner cities to abroad. We can no longer afford to continue creating unstable environments for people of color while we demand that they remain peaceful and silent.

If we don't call to reinvest in community social services with the divested funds from all branches of law enforcement and military, defunding the police will risk changing nothing. Instead of the police, those invested in the continued oppression and control of people of color will send in the Department of Homeland Security. Instead of police, they will deploy armored tanks and highly trained military officers whose appetite for war extends to the very people whose rights they swore to uphold. They will still ravage poor countries in the Middle East for oil. There will still be thousands of immigrant children torn away from their parents just to end up missing without a trace, and our education and healthcare systems will still resemble those of "developing" countries.

It is not enough to defund the police.

We need to defund the whole system – from the militarized control of communities of color to our culture of imperialism and violence – if we are ever going to be a country that prioritizes safety, justice, and equality.

Emilce Quiroz is the Communications Coordinator for Common Justice. She's a graduate student at the Craig Newmark Graduate School of Journalism where she's majoring in Spanish and Documentary Journalism. She graduates Fall 2020.